The largest military exercise in Europe – Exercise Joint Warrior is a bi-annual UK tri-service multinational exercise that involves numerous warships, aircraft, marines and troops from the UK and their NATO partners. The exercise is usually held twice a year, but will only take place once in 2018.

During April thirty plus warships arrived at various locations around the Clyde in preparation to join the exercise. Casper Defence were pleased to provide logistical support and local expertise across multiple locations in Scotland and Northern England to many of the visiting warships from countries including Norway, Denmark, the Netherlands, Belgium, Spain, Turkey and the USA.

Vessels called at various ports throughout Scotland before, during and after the exercise including Glasgow, Faslane (HMNB Clyde), Largs, Campbelltown, Loch Ewe, Stornoway, Kyle of Lochalsh, Greenock, Aberdeen and Leith (Edinburgh), whilst we also had port visits to Liverpool and Hull. 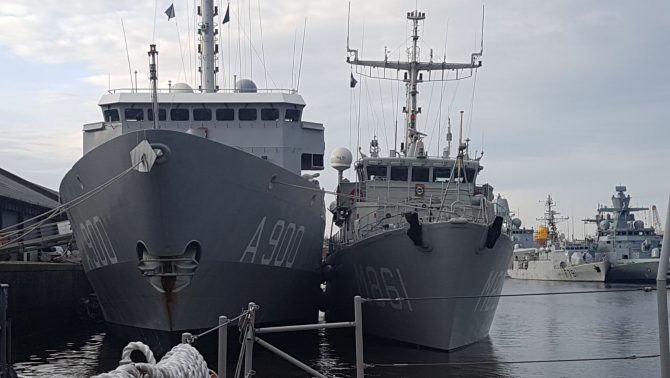 The arrival weekend was particularly challenging with Casper Defence handling ten warships in King George V Dock Glasgow, whilst simultaneously looking after four in Faslane, one in Largs and one at anchor in the Clyde.

To ensure we provide the highest quality of service to the visiting naval vessels, the Casper Defence team deployed to a base in Glasgow for the duration of the exercise ensuring all of the individual vessel requirements were met from a central location. The Casper team were available 24/7 and took care of the vessel movements in and out of the ports, arranging towage, pilotage and line handling. Once alongside the team took care of other husbandry matters such as arranging food, topping up the drinking water, technical supplies, solid and liquid waste removal plus multiple types of transport including hire vehicles, chauffeur driven vehicles, liberty buses and personnel transfers.

This website uses cookies so that we can provide you with the best user experience possible. Cookie information is stored in your browser and performs functions such as recognising you when you return to our website and helping our team to understand which sections of the website you find most interesting and useful.

Strictly Necessary Cookie should be enabled at all times so that we can save your preferences for cookie settings.

If you disable this cookie, we will not be able to save your preferences. This means that every time you visit this website you will need to enable or disable cookies again.